Although we now approach ancient texts primarily through the written word, they were originally meant for performance. Poetry in particular was probably chanted or sung, as we know from the use of words relating to music in the opening lines of poems and poetic collections. Nowhere is this performance context more clear than in the use of meter in ancient poetry. Although the untrained viewer can’t see this meter in an ancient text (unlike, for example, the musical notation on modern sheet music), once you know how to scan well, you can quickly begin to recite texts as they were meant to be heard.

The nice thing about scansion is that it’s in many ways easier than other tasks beginning language students have to perform. In this first post, I’ll introduce the two major Latin meters: dactylic hexameter and pentameter.

Both major Latin meters are based on the dactyl, a unit of verse that is comprised of three parts: long, short, and short. If you remember that dactylos means finger in Greek, it is easy to remember the unit: just turn your finger sideways and look at the relative size of the three segments: 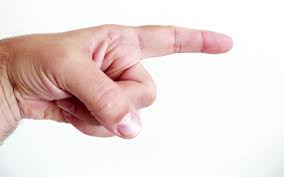 The first, from your palm to the first knuckle, is the longest. The next two (between the two knuckles and from the knuckle to the tip) are roughly the same length, but shorter than the first. These are your long short short syllables, or dactyl. Dactyls are represented graphically as follows:

A basic rule of ancient poetry is that any two short syllables can be replaced by a single long syllable. So in dactylic verses, you have two options for each individual foot: long-short-short (a dactyl) or long-long (called a spondee). There are many other metra options, but dactylic meter only uses dactyls and spondees.

The ideal dactylic hexameter verse is five dactyls and a spondee. We represent the end of the foot by drawing a vertical line (or a slanted line):

But you can replace any of those dactyls with a spondee. As a general rule,  the fifth and sixth foot are frequently dactyl-spondee, while the first four feet are more flexible. Technically, the sixth foot is always long-X (the X standing in for either a long or a short); in practice, it is always scanned as a spondee.

A dactylic pentameter is made up of five feet. One of the feet is split in two around a central caesura, or pause (more on this below):

This pentameter line is largely fixed in the second half, after the caesura (marked by ||). But the first two dactyls can also be replaced by spondees, as in the hexameter.

One hexameter-pentameter pair makes a couplet.

Before going any further, we should pause to think musically for a moment (in English) about syllables, pronunciation, and meter. Importantly, these do not always align — sometimes singers hold a syllable for more than one beat, you swallow or change the stress on a syllable, or you contract a syllable (from don’t know or do not know to dunno, for example) for the purpose of keeping the beat (meter) of the music.

Here are a few examples of this in modern music (and I apologize in advance for how awful some of these songs are):

This clip from Frozen has the subtitles so you can follow along with the words. Notice how words at the ends of lines, like go or more, are longer than similarly short syllables that come earlier (like let). Some lines, like can’t hold it back, are spoken quickly, while others are lengthened to fit the music. Latin and Greek verse do something similar, in that sometimes a syllable will become long based on its position in the meter.

In Avril Lavigne’s Complicated, the singer changes the stress on the word frustrated to fit the beat of her song (and have it rhyme with complicated). Similarly, in Latin poetry, there is not necessarily a connection between word stress and length of syllable. Because English is a stress-based language and our poetry (and music) is based on stressed and unstressed syllables (like frusTRAted vs. the typical English FRUStrated), the disconnect in ancient meter between stress and length can be hard to work with at first.

Rarely, modern music will feature true elision, which is when a vowel is swallowed in order to shorten a word by a syllable. If you’ve read Shakespeare, you may be familiar with elisions like ev’ry for every or sev’ral for several. We can hear a similar elision in Napoleon (pronounced Napolyin, with e and o elided) in this Cole Porter song:

There’s another example in the first line of the Porter song Ev’ry Time We Say Goodbye:

When a word break occurs in the middle of a dactyl, we get a caesura, or pause. These are represented by two lines (rather than the one line that separates feet):

As we’ll see later, some caesarae are more important than others; usually there is one major caesura per line, in the third or fourth foot.

So to summarize what we’ve learned so far, dactylic hexameter is made up of six feet with a long-short-short or long-long vowel pattern. Word endings and foot endings are often not in the same place, causing caesurae. And the word stress also does not necessarily indicate a long or short vowel. So what does?

There are two ways to determine a long vowel in Latin. Some vowels are long by nature, while others are long by position.

Vowels that are long by nature are the vowels that you may have learned with a macron in introductory Latin. Examples include every ablative singular of the first and second declension; the penultimate vowel (a, e, or i) in the infinitives of first, second, and fourth conjugation verbs; and the u in fourth-declension genitive singulars. These vowels are always long, hence the macron; they will very very rarely take up the short space in a foot. In this introductory post, we’ll assume that they can never take the short space.

Diphthongs, like the -ae in the genitive singular first-declension ending, are likewise long, because they are made up of two vowels.

There are a few exceptions to the two-consonant rule. H is a consonant in English, but is not considered a consonant in scanning Latin. And a variety of letters (t, d, b, p, k, g) preceding l or r will not make a short syllable long. This rule is called mute (t, d, b, p, k, g) + liquid (l, r). I like to remember the mutes in pairs as letters that sound interchangeable in the middle or at the end of words: think about pronouncing Latin (laddin), nothing (nothink), and Hubble (hupple).

So much for the theory! In the next post, we’ll practice by scanning some lines of the Aeneid, the Amores, and (finally getting to Greek) the Iliad.

One thought on “Help with Latin texts: Introduction to scansion”